A contemporary office in the 19th-century building by the French-Ottoman architect Alexander Vallaury, in neo-classical style with Belle Epoque details, along with elements of the eclectic Ottoman architecture.

The 19th-century building designed by the French-Ottoman architect Alexander Vallaury that now houses the Autoban Studio was purposefully built as the Union Française - to serve as a local to the French community in Istanbul who were quite active in the social life of the city back in the day. The main façade of the building is in neo-classical style with Belle Epoque details, along with elements of the eclectic Ottoman architecture.

When Autoban signed the lease agreement, the property was right out of a rough construction work. The marble flooring was partly done, the walls were just concrete surfaces and there were columns in varying sizes all around. Starting with the marble flooring which they restored and completed, Autoban put the ornate wooden framed window of the front façade at the centre stage of the studio’s design scheme, and punctuated its historical beauty by keeping everything simple around it. They also restored and preserved the three marble plates carved with the names of the martyrs of the French Legion.

The spaces in between columns were filled with enclosed floor-to-ceiling storage units with several shutters that give the effect of strictly ordered files on cupboards. The studio’s two kitchen units are also imbedded into the walls to keep the office clutter-free.

For the purpose of designing an office space based on functionality and aiming to create an ideal working environment for everyone in the team, the designers took advantage of the generous proportions of the space and created an uninterrupted, open-plan office with plenty of transparency, which signified open-minded people engaging in all phases of work. The transparency also enables daylight to travel all throughout the office. In the evenings, the hidden lighting system sets the mood of the studio. 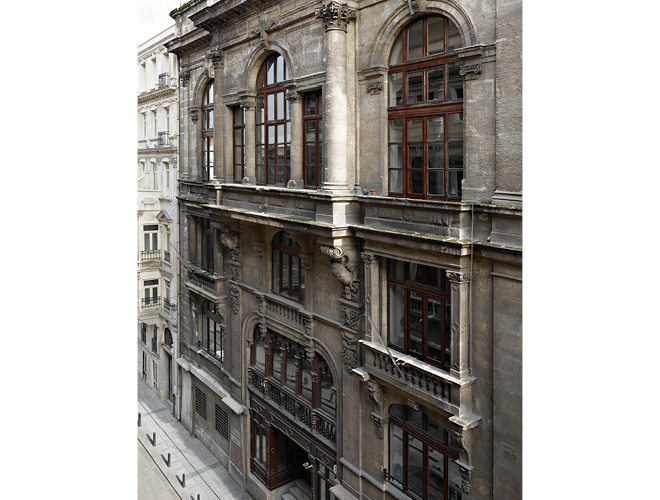